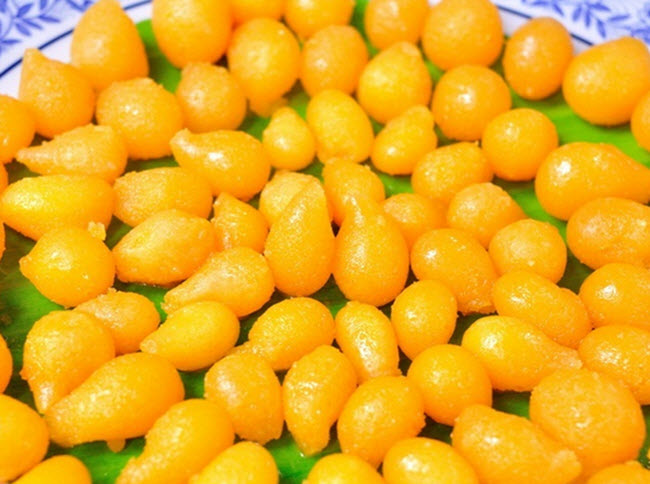 Thong yot (golden yolk drops) is an ancient Thai dessert. It is often served at important celebrations and ceremonies, including weddings.

4 to 10 tablespoons of Thong Yot flour, which is a wheat flour and rice flour mixture

The Nine Auspicious Thai Desserts are an important part of many major celebrations in Thailand, such as weddings and ordinations. In addition to being delicious, they confer blessings on the recipient. Each dessert is tied to a certain blessing, which is why all nine deserts tend to be served together on the same tray – you want your guests to receive all nine blessings.

Tong means gold in Thai, and gold is a symbol of wealth and good luck. This dessert consist of round egg yolk drops, and is a blessing for continuous and sustained wealth.

Tong yip is made form roughly the same ingredients as tong yod, but the syrup is scented with jasmin and the shape of the “gold” is different. Instead of making round balls, you make five-point stars and place them to cool and firm up inside small porcelain cups.

As you already know, tong means gold in Thai. Yip means “to pick something up” and this dessert is a blessing for increased wealth. The idea is that what you touch and pick up in life will turn into gold.

Just like the two desserts above, foy tong is made from egg yolks and has a wonderfully golden colour. Foy tong consists of sweet shredded egg yolk and looks like golden noodles. Noodles symbolizes things that are long-lasting, such as a long-lasting life or a long-lasting relationship. Foy tong is a blessing for long lasting love and good fortune.

To make foy tong, you pour the yolk batter through a narrow tunnel and into a pot of syrup, creating long yellow strands. During the next step, a long and pointed piece of wood is used to stir the strands until they become smooth. Remove the strands from the heat and wrap them around themselves.

Tong ek is made from egg yolks, wheat flour and plenty of sugar. It symbolizes faithfulness and its therefore especially meaningful at weddings. Tong ake is carved into the shape of a flower and is rather difficult to make. It is the most elaborately shaped of the tong-deserts.

In the past, this was a rose-shaped dessert instead of a stacked layered one.

This dessert is made from mashed steamed beans and coconut milk, that is stirred until it gets thick and then rolled into small balls. Each ball is dipped in egg yolk and cooked in syrup. Each piece is shaped like a jackfruit (khanun in Thai). Khanun is pronounced like kanoon, and the word noon means support in Thai. This dessert is a blessing for support from others.

Ja Mong Kut was invented during the rule of King Rama II, while Dara Thong was created in the 1930s by Dame Jue Nakornrachaseni.

This is a light and fluffy dessert made from rice flour, sugar, baking powder, food colouring and jasmine essence. The rising pastry symbolizes the growing strength of love, from young love to mature love. It can also be a blessing for general improvements in life. The word fu (foo) means to rise or to increase, and tuany fu means rising bowl.