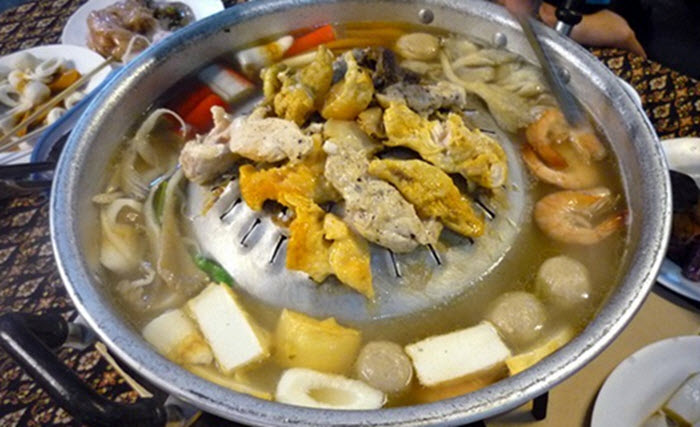 Chim chum, also known as Jim jum and Chaeo hon, is a popular street food in Thailand. The name chim chum is used both for the dish and for the earthenware pot in which the dish is cooked. This earthenware pot is heated over a brazier filled with hot coals.

The pot and the brazier is not hidden away in the kitchen; it will be placed on the table around which you and and fellow diners are seated. The pot is filled with broth, and to the broth various vegetables and herbs are added. You then use your chopsticks to put a peace of meat in the broth and let it cook quickly before you take it up again, dip it into nam chim (a sauce) and eat it. In Thai, chim means to dip something and chum means to drop something into liquid for a brief period of time.

Chicken and pork are among the most commonly used meats for chim chum, but the cooking method will work fine for a wide range of other proteins as well.

Examples of herbs that are often added to the broth to provide flavors – and sometimes also because of their alleged medical properties – are galangal, kaffir lime leaves, lemongrass and sweet basil.

Side dishes can be added to the meal to make it more varied and balanced. You can for instance serve glass noodles, eggs and fresh vegetables. The glass noodles can preferably be flavored with some of the nam chim.

How to make nam chim

As mentioned above, the meat is traditionally dipped in a sauce called nam chim before its eaten. There are many different nam chims, and most of them are a combination of salty, sweet, spicy and sour ingredients.

Here is one example of an ingredients list for a popular nam chim:

The exact proportions of the ingredients should be adjusted to fit your own preferences. Don’t be afraid to experiment. The consistency of the finished product should be a liquid sauce, not a paste or puree, so you need to use quite a lot of liquid ingredients.

To make the nam chim, start by placing garlic, coriander and salt in a mortar and pounding them with the pestle. Don’t use a mixer. You are not supposed to reduce the ingredients to a paste, just pound them. Add the chilies and crush lightly. Add syrup, fish sauce, lime juice and shallots. Stir around the ingredients, but don’t overdo it. Leave the sauce to rest for at least one hour, preferably longer. The flavors will be more intense and complex if you allow the sauce to rest longer.