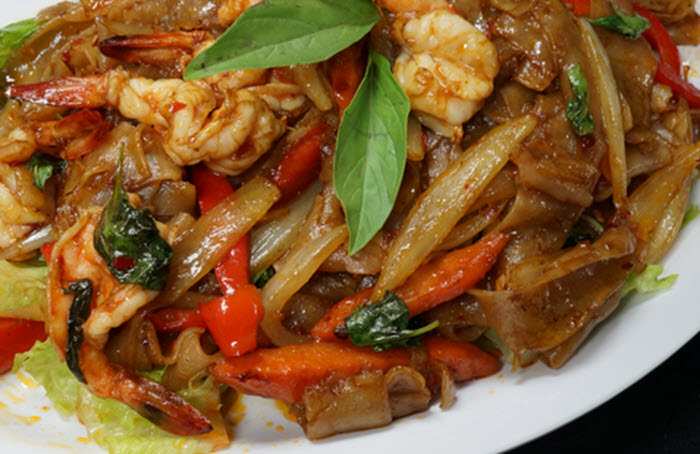 Drunken noodles was made popular in Thailand by Chinese immigrants. In Thailand, it is known as phat khi mao. Khi mao means drunkard, but why the dish is considered ”drunken” is shrouded in mystery. Khao phat khi mao is a similar dish, where fried rice is used instead of noodles. So if you want some variation, you can try out drunken rice as well.

According to one theory, the idea of the noodles being “drunken” stems from the fact thet rice wine is used to prepare the dish. There are a lot of examples of chicken dishes from around the world that are named drunken chicken because of the alcohol that’s used in their preparation.

An other theory claims that it isn’t the noodles that are drunken and that the name phat khi mao is more accurately translated into drunkard’s noodles. According to this train of thought, phat khi mao is a dish that is easy to make from what you can find in your cupboards when you come home drunk after a party.

There are many different recipes for making phat khi mao, but they all tend to follow the formula noodles + protein + vegetables + rice wine + several different seasonings, including chili, basil, fish sauce, oyster sauce and soysauce.

Below, you will find a recipe for drunken noodles with chicken, but the recipe works with a lot of other protein sources as well, such a tofu, duck or pork.

Rest of the dish